THE FUTURE OF MAGNA PARK

GLP is proposing to submit an outline planning application to develop a biomethane refuelling station and petrol filling station, alongside two drive through coffee and food outlets, as well as an MOT station, at Magna Park, Lutterworth.

This web page provides an introduction to the project, the planning process, our next steps as well as seeking your views on our outline proposals to develop the site.

What does the proposed scheme include?

GLP is seeking to apply for outline permission for the site with the future development likely to comprise:

The application is to be submitted in outline form and is intended at this initial stage to establish the principle of ancillary uses and facilities to support the planned growth of Magna Park. The individual elements will only come forward once an end operator for each use has been secured. The specific details of how the buildings will be designed and laid out etc. will be submitted to Harborough District Council for further approval. 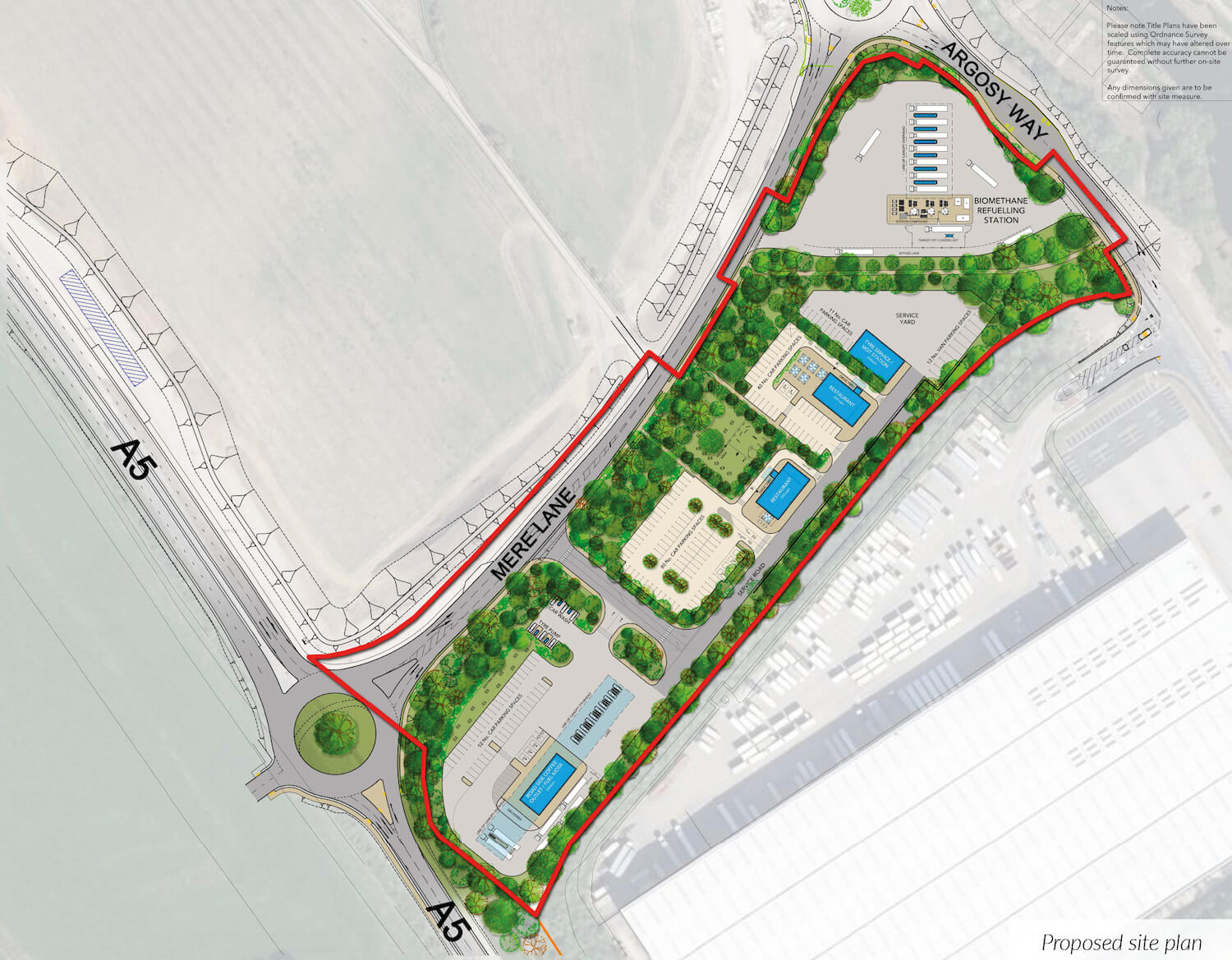 Magna Park benefits from planning permissions to grow from 10mil sq ft to 16mil sq ft of strategic logistics space. In addition, the number of employees will increase to approximately 15,000 employees.

GLP are committed to ensuring that the park expands in the most sustainable way possible. The proposed ancillary uses will enable Magna Park employees to access important services and amenities that will help reduce vehicle journeys made to and from Magna Park.

As well encouraging the businesses at Magna Park to transition away from a reliance on diesel fuel in favour of more environmentally friendly sources of fuel such as biomethane. 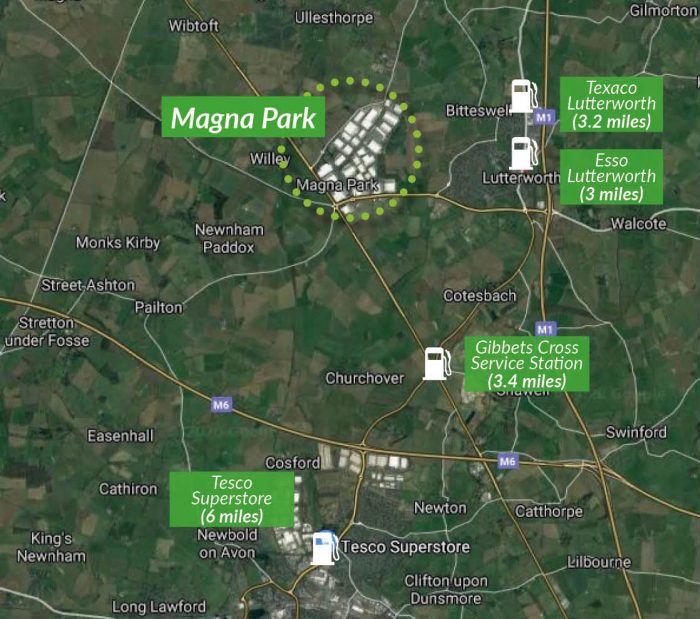 Why a new filling station at Magna Park?

The proposed site is located within the boundary of Magna Park and the adjacent road network. The site is south of Mere Lane and close to Argosy Way.

Benefits to the local community

We understand with any new development that the local community will have concerns. Below we have tried to capture our response to the likely frequently asked questions.

Next generation of HGVs

More than 18% of the UK’s road transport emissions come from HGVs, yet they represent just 1% of vehicles on the road. 18,000 diesel trucks would need to be replaced by bio-LNG to achieve the same savings from displacing more than 500,000 petrol and diesel cars with electric.

It is anticipated that the scale of development will not give rise to any significant environmental effects in relation to the air quality matters from increased vehicles presence. An Air Quality Assessment will accompany the planning application. Preliminary assessment indicates that the predicted level of traffic from the proposed development is unlikely to cause a noted air quality impact.

The likely traffic increase will be minimal, with it mainly associated with modest visitors’ of the restaurant and fuel facility. HGVs and cars visiting the site will most likely comprise of those of existing employees at Magna Park or those that are already passing the site on the A5. The number of new trip generated by the site and the impact on the wider highway network is anticipated to be small.

The proposed combination of landscape features and neighbouring commercial development has the potential to significantly filter or screen the development of the site. Mitigation planting aligning the site boundary with the A5 would further screen the site in views from the wider context, making the site barely perceptible from beyond the immediate distance.

The majority of building on the site will be one storey with the highest elements being the storage tanks at 19m, being located to the back of the site against a backdrop of large warehouse buildings to the north and south. 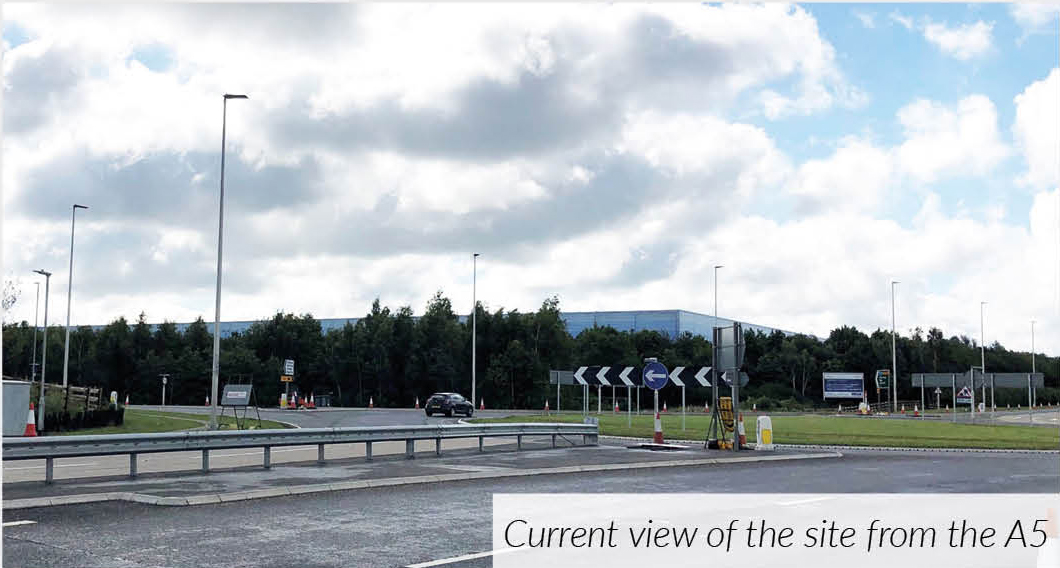 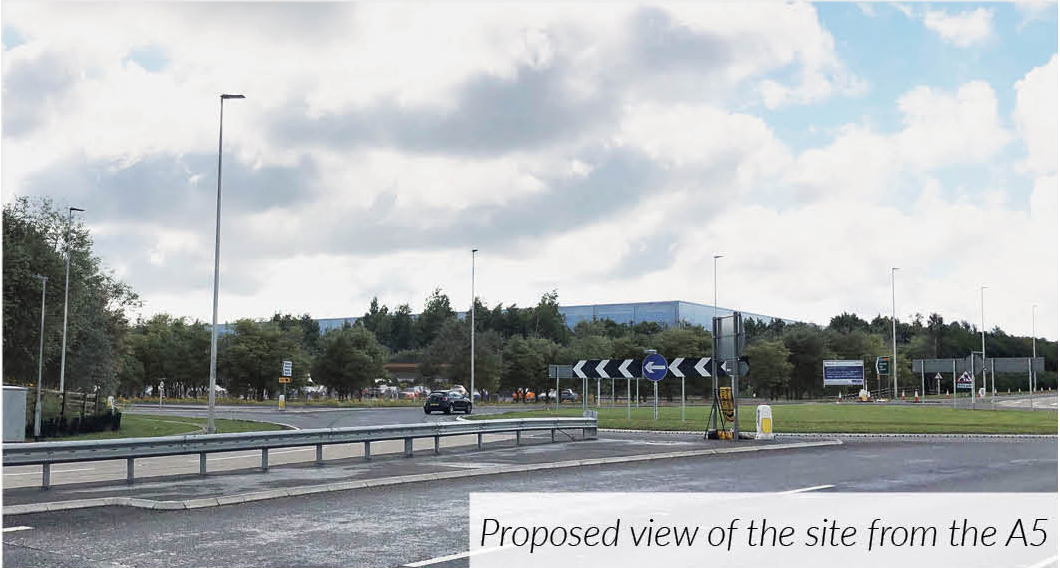 Access to the biomethane refuelling station will be from Argosy Way and Mere Lane. The access/exit for the other uses will be direct from Mere Lane.

Thank you for taking an interest in GLP’s proposals for ancillary services and amenities at Magna Park. We would like to know what you think about our outline proposals. You can share your views with us by completing this consultation questionnaire.

Following this consultation, we expect to submit our outline planning application in Autumn 2020. If our application is approved by Harborough District Council, there will be a further opportunity for you to make representations as part of the process for determining a subsequent reserved matters planning application. At this stage the operators of the facilities and all the design details will be made available for consideration.

All feedback responses should be submitted before Monday 21st September 2020.