A new campaign to help reduce the amount of litter left in laybys, along major roads in the Harborough district, has been launched today (28 June) with day of action.

Harborough District Council is teaming up with Magna Park owners GLP, Lutterworth Town Council, and other Councils, to crackdown on roadside litter with new signage going up this week in local hotspots and at Magna Park.

The first action day took place on Monday 28 June 2021 along the A5, A426 and the A4303 roads in the district, which saw enviro-crime officers speaking to drivers and new signage, written in a number of languages, installed.

Further action days will be held along the A47, A6 and the A4304 roads over the coming days.

Extra patrols – using vehicles fitted with cameras – will also be carried out.

The campaign will also involve local authorities from across the district boundary, including Blaby District Council and Hinckley and Bosworth Borough Council.

Following the success of the Council’s Tip Off campaign in tackling fly-tipping in the district, it is hoped this latest campaign will reap similar positive results.

Cllr Jonathan Bateman, Harborough District Council’s Cabinet lead on environment and waste, said: “We want a cleaner, greener countryside, it’s as simple as that. We know we can’t stop all littering but we are working hard with the right people to hopefully make a difference. It is totally unacceptable to drop litter anywhere, especially by verges where it can harm wildlife and impact on biodiversity; it is important drivers dispose of litter appropriately.”

Gwyn Stubbings, Planning Director at GLP, said: “We are very pleased to be working in partnership with Harborough District Council on this important initiative, to ensure that Magna Park is playing it’s part in keeping the roads and countryside in the district clean and attractive. Over 10,000 people work at Magna Park and we will be actively spreading the message that we all have a responsibility to prevent littering and any associated anti-social activities.”

By law, it is an offence to drop litter in any open public place, including cigarette butts and chewing gum, with a possible £150 fine for anyone caught. Failure to pay could result in legal proceedings and a fine in court of up to £2,500.

Anyone with footage (eg. from a dashcam) of somebody dropping litter from a vehicle can submit this to the Council as evidence.

To report litter, or if anyone would like the action team to focus on a particular area in the district, contact the Enviro-crime team at envirocrime@harborough.gov.uk 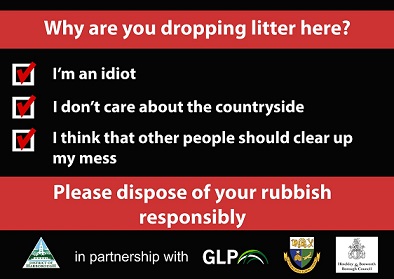