MOLA (Museum of London Archaeology) are undertaking a programme of archaeological investigations at Magna Park, Lutterworth on behalf of Gazeley.  The works were designed and overseen by RPS Consulting according to a scheme of work agreed with Leicestershire County Council.  The following comprises a provisional summary report on Area 18 and X25, on both of which fieldwork has been completed, but post-excavation interpretation has yet to be started.

The archaeological potential of the site has been previously considered through an Archaeological Desk-Based Assessment (CgMs 2015), which included the results of the geophysical survey (ArchaeoPhysica 2015) and fieldwalking (MOLA 2015). The Desk-Based Assessment was subsequently revised following the results of targeted predetermination trial trenching and metal detecting survey (Albion 2015a, 2015b, 2016). In addition, a Level 4 historic building survey was completed for Bittesby House, Bittesby Lodge, and Bittesby Cottages within the site in 2016 (Trigpoint 2016).

The sites are located to the east of the former Roman road known as the Watling Street, now the modern A5 and on either side of the disused railway line, which is aligned north-east to south-west.  It is believed that both sites are related to the Deserted Medieval Village (DMV) of Bittesby (Scheduled Monument list entry 1012563, www.historicengland.org.uk ), the currently un-investigated core of which is located to the south-east of Area 18 and to the north-east of X25.

Historic England summarise the known history of the Bittesby DMV as follows;

Although partly disturbed, the deserted medieval village at Bittesby contains earthworks in good condition and retains high archaeological potential. The village is documented historically and, unusually, the period of desertion is known.

Bittesby deserted village site lies 400m north of the A5 Watling Street and 4km west of Lutterworth and consists of earthworks to the east of a former railway line. The village earthworks comprise hollow ways and house platforms. A ditch up to 1m deep runs along the north of the area, near to which is some faced stonework indicating the site of a chapel known to have existed there. A north-south flowing stream runs on the eastern side of the site, down to which several hollow ways run, the largest of which is 12m wide and up to 2m deep. Bittesby is listed in Domesday Book and in 1279 the village was made up of 25 families. Enclosure and depopulation is recorded in 1488 and 1494, and by 1536 only the Salisbury family was left. 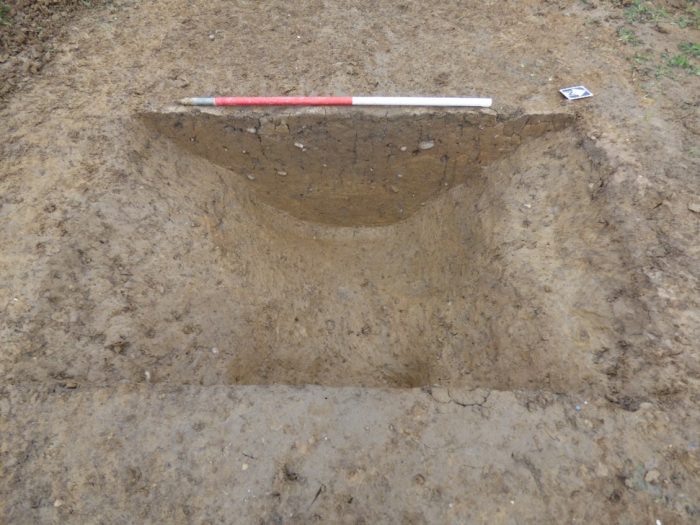 Archaeological features in this Area X25 comprised a series of diches defining small enclosures or paddocks, within which were a number of shallow pits and post holes, although nothing that could be identified as a structure.  These produced low quantities of artefactual material, reflecting their peripheral location.  In the northern extremity of the area quarrying had removed any earlier archaeology and possibly relates to the construction of the railway line which is embanked at this point.  On the Ordnance Survey mapping of the 1880’s quarrying is indicated but is no longer present by the middle years of the twentieth-century.  The now-disused railway line was a branch line between Rugby and Leicester of the Midland Railway, the company formed in 1844 extending northwards from the London terminus at St Pancras. It was closed in 1961. 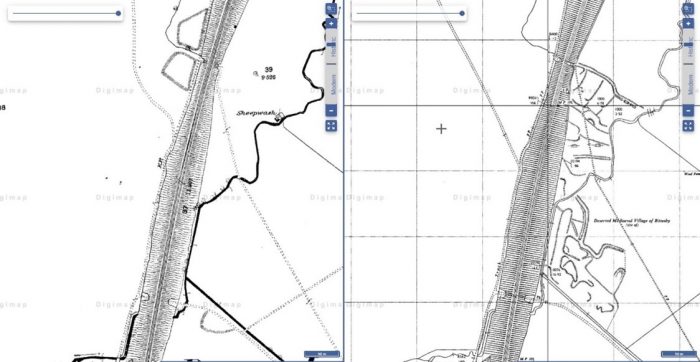 In Area 18 archaeology only survived within the south-west corner of the site, the rest of the area having been heavily disturbed by quarrying, also thought to be related to the construction of the railway line.  The surviving remains comprised a series of mostly straight boundary ditches on the same alignments as in X25 and thus appear to represent further outlying paddocks or enclosures related to the medieval village. 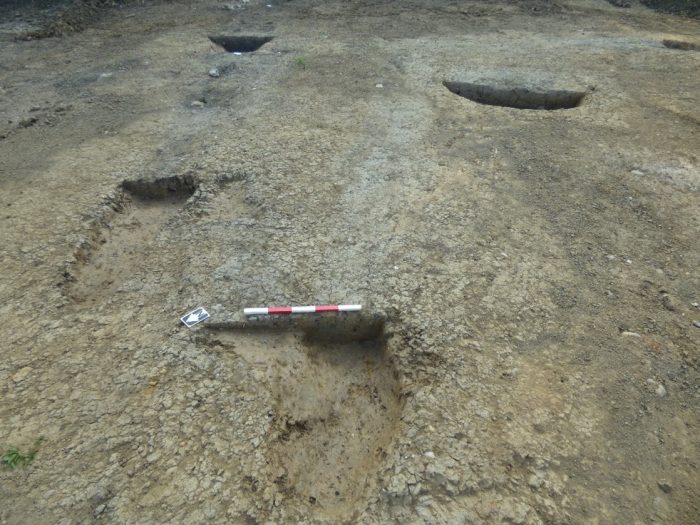 Again the relative paucity of finds, mostly ceramic, indicates the outlying nature of these features and possibly simply relates to domestic material being deposited as a result of manuring or casual disposal.

Initial examination of the artefacts indicates that both sites are predominantly medieval in date and comprise a series of largely fragmentary paddocks enclosures delineated by ditches, some of which may have been both for drainage and to delineate areas of activity.  Overlying the features were series of furrows, indicating that the area had reverted to agricultural usage later in the medieval period, probably as a result of shrinkage in the village’s size and population.

Most of the ceramic finds are from Area 18, perhaps deriving from disposal or manuring, and suggest this area was more likely to have been cultivated or used for disposal.  The finds from X25 contained more animal bone, perhaps indicating that this area was more focussed on stock management.  The latest pottery recovered from Area 18 dated to the 16th to 18th century, indicating continued usage of the area, albeit probably for agricultural practices. 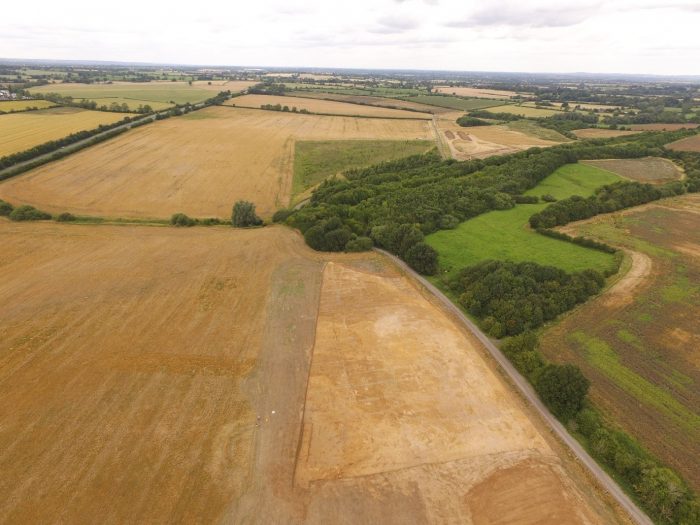 Drone picture of Area X25 in the foreground, looking north-west. Area 18 can be seen in the top right corner; the DMV earthworks are in the pasture field to the right.