MOLA (Museum of London Archaeology) are undertaking a programme of archaeological investigations at Magna Park, Lutterworth on behalf of GLP. The works were designed and overseen by RPS Consulting according to a scheme of work agreed with Leicestershire County Council. The following comprises a provisional summary report on Area 10.

The site is located at the northern limits of the current development area and is bounded by open fields. It is situated on the upper part of a gradual east-facing slope bounded by a public footpath to the west, with a farmer’s track situated on the eastern side of the field. The current A5 (former Watling Street, Roman road) is approximately 450m to the south-west.

The surviving archaeology lies directly beneath the plough soil and is heavily truncated by both medieval ridge and furrow and modern ploughing. The medieval furrows are aligned north-northeast to south-south-west across the whole area.

Five phases of Iron Age to Roman activity have been noted across the site, comprising a series of small and large enclosures, field systems and boundary ditches. A single burial was identified which formed part of the earliest phase of activity. Two potential watering holes were also identified. Multiple pits were investigated across the area; these will be incorporated into the above phases once analysis of the recovered artefacts has been completed. No clear structures, formed by these discrete features, could be identified but it is possible that some archaeological traces have been lost due to modern ploughing. A brief overview of each phase is outlined below. Dating has, at this stage, been provisionally determined only by spatial or stratigraphic relationships, where these exist, since the recovered finds have not yet been processed. Once full analysis of the recovered assemblage has been recovered, these provisional dates may be subject to change. 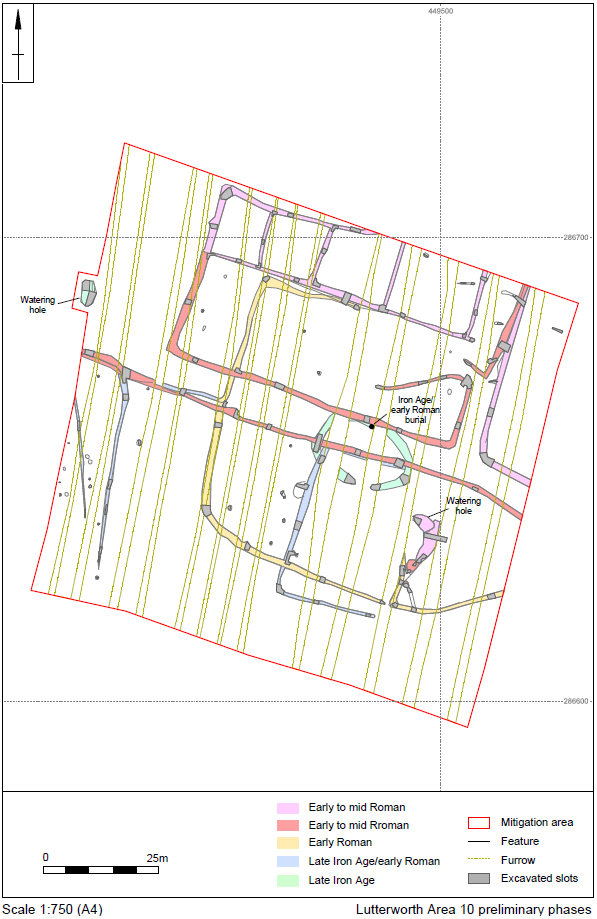 Phase 1
The earliest features in the area consisted of curvilinear enclosure and a watering hole which have been provisionally dated to the late Iron Age. A small C-shaped curvilinear enclosure, situated within the central part of the site, was one of the earliest features on site. A potential former entrance was located on the southern side, though it was heavily truncated by later furrows (Fig 1). 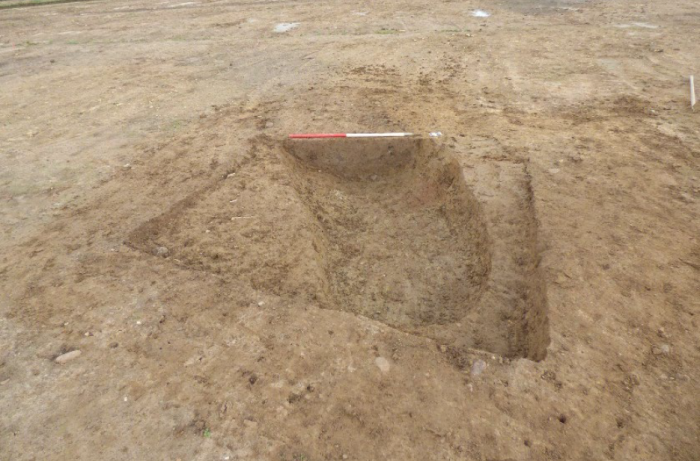 A large pit, presumed to be a watering hole, was also identified on the north-western edge of the area. The limit of excavation was extent to allow the full extent of the pit to be mapped and a full profile of the pit to be recorded.

Phase 2
The next phase of activity was evident in an adjacent pair of sub-rectangular enclosures delineated by lengths of straight ditches aligned broadly north-east to south-west and north-west to south-east (Fig 2); these have been provisionally assigned a late Iron Age/early Roman date. The shared central ditch formed the eastern side of one enclosure and the western side of the other. The northern arm had been heavily truncated by later activity (Phase 4) but enough survived for the original course to be assumed. No southern boundary was identified to the western enclosure nor an eastern boundary to the eastern enclosure; the presence of medieval furrows on an almost identical alignment may account for the latter. 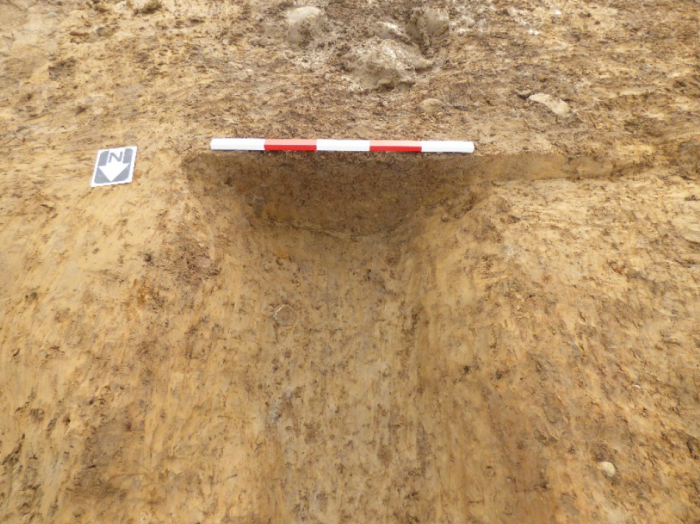 The fragmentary remains of an subadult inhumation were identified in close proximity to the both the Phase 1 C-shaped enclosure and the southern arm of the later Phase 4 sub-rectangular
enclosure; due to the disturbance of the later (Phase 4) ditch, the exact date of the inhumation was difficult to determine stratigraphically. The skeletal remains were in poor condition but the subadult seemed to have been buried prone (laid on the front). No clearly identifiable grave goods were found with the burial although the base of a Roman vessel situated nearby might be related to the inhumation. A large stone found on the southern side of the grave cut might indicate a displaced grave marker.

Phase 3
A large, sub-rectangular enclosure was established in this phase and this has been provisionally dated to the early Roman period. A ditch, aligned broadly north-east to south-west, formed the
western side of the enclosure and a fragmentary north-west to south-east ditch marked the northern edge (Fig 3). A slightly curvilinear ditch, aligned north-west to south-east, formed the
southern arm. The eastern limit of the enclosure extended beyond the area of excavation. 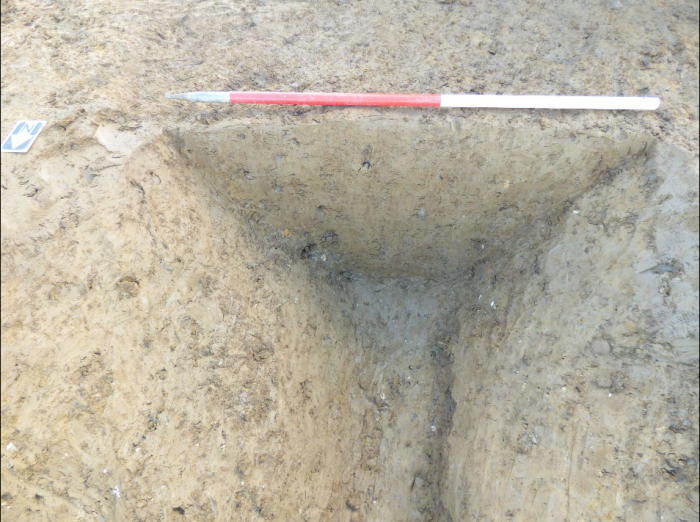 Phases 4 and 5
Whilst identifiable and recorded here as two additional phases, where surviving stratigraphic relationships could be determined, Phases 4 and 5 most likely represent reconfigurations or
chronological developments within the use of the same sequence of field systems, during the early-mid Roman period.

Activity in Phase 4 focussed in the northern part of the area, when a boundary ditch, aligned northwest to south-east, was established across the site. Parallel to this ditch, located c15m to the north, an enclosure was established in Phase 4, of which the eastern, southern and western sides remain.

The northern enclosure was rectangular with either an in-turned entrance or partial internal subdivision surviving on the eastern edge. The central area between the boundary ditch and this enclosure most likely formed a narrow trackway.

The northern limit of the Phase 4 enclosure was seemingly re-modelled in Phase 5 to incorporate a later ladder enclosure, comprising four separate square or sub-rectangular areas, none of which had identifiable entrances (Fig 4). A further rectangular enclosure was established on the eastern side of the northern enclosure system, and the southern arm of this later enclosure extended parallel to the trackway which was presumably still in use in this period.

A short length of ditch and a watering hole was located to the south of the other activity. These features may have formed part of the grazing area for livestock. 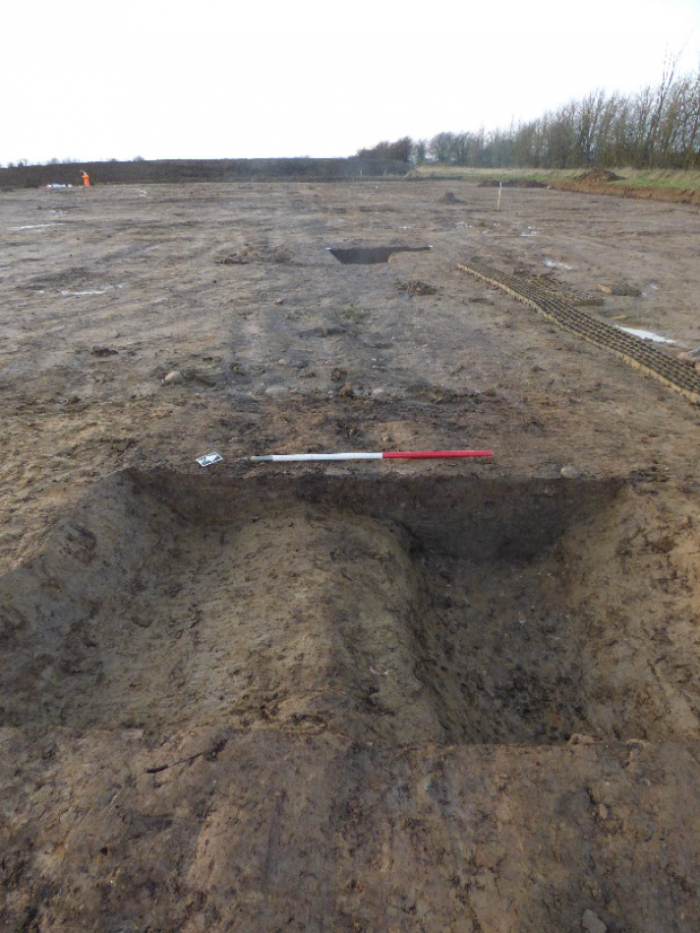